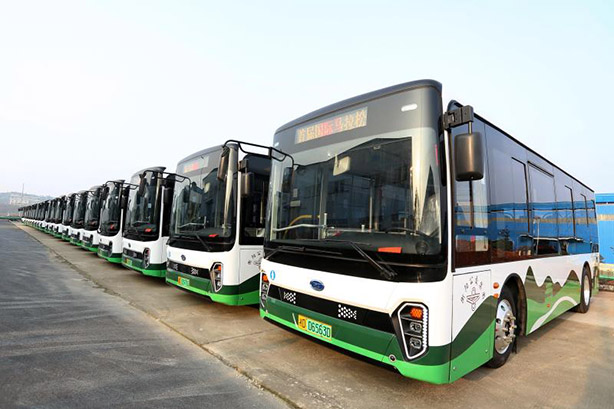 On April 21, the drivers of the city bus group arrived at the scene, boarded their beloved car, looked east and West, and happily accepted the operation guidance of Hengyang smart bus technicians. Bus drivers are proud to say that they have been looking forward to it for a long time. Today, they can finally drive new energy vehicles of Yancheng brand! 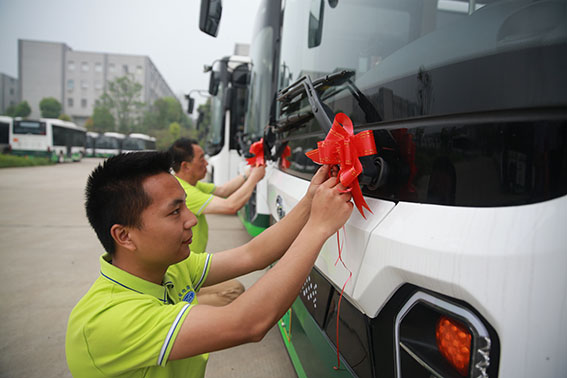 On April 22, the "Yancheng brand" new energy bus was officially put into operation on bus line 161, which starts from Chuanshan bridge and ends at Baima village, passing through 13 stations, with a total length of 40 kilometers. All the way, the interior of the new car is simple and generous. There are 5 cameras installed to monitor the situation in the car in an all-round way. The cab is equipped with a 1.8m high safety isolation door. The coin office has installed the latest bus swipe card machine to support wechat payment. 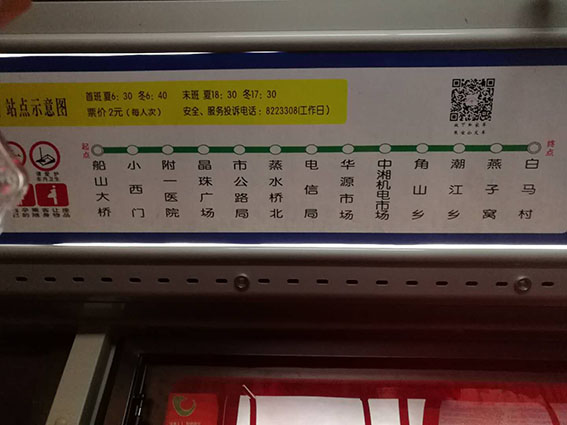 The new car is 110mm wider and 386mm longer than the old one, and the interior of the car is more spacious and bright;

★ the whole vehicle adopts the first-class step design structure, which makes it more convenient and safe for passengers to get on and off the vehicle;

★ the endurance mileage under the comprehensive operation condition can be more than 300km, which fully meets the needs of the whole day's operation mileage of the bus.

In the early 1980s, the hyk6120 diesel coach independently developed and produced by the company passed the 30000km intensive test of Hainan Island National test ground, and was listed as the designated production plant of the coach by the former first engine department and the later China National Automobile Corporation and the key production enterprise of Hunan Province. It used to supply bread processing vehicles, sewage purification vehicles and other special vehicles for the General Logistics Department of the PLA in batches, develop and produce passenger compartment type railway foundation exploration vehicles for the former Ministry of railways, and provide passenger compartment type power generation vehicles and other special buses for the Asian Games.

In 2018, the municipal Party committee and the municipal government introduced China Hengtian Group. By introducing advanced products and technologies, Yancheng brand, an old traditional diesel car brand in the bus industry, was reborn and revitalized.

"It's not easy for us to come this way. If we don't have the city leaders to dispatch for many times, set up a special project class, and the city public transport group to arrange carefully and reasonably, and provide strong guarantee in the process of vehicle production and licensing, it's difficult for us to realize the recovery of" Yancheng "bus in such a short time." At the scene, Dong Nan, executive deputy general manager of Nanjing Hengtian Lingrui Automobile Co., Ltd., looked at a new car about to be put into operation, and said with emotion, "in the future, we will make more efforts to serve the people of Hengyang as always, make greater and stronger local new energy automobile brands, and make greater contributions to the development of Hengyang new energy automobile industry.".

Guo Jianzhong, deputy director of the Municipal Bureau of human resources and social security and full-time deputy director of the new energy automobile industry development coordination office highly praised: "as one of the four major new energy automobile industry projects signed by Hengyang in September 2018 for investment and construction, the Hengyang intelligent electric bus project has been promoted fastest and achieved the fastest results, and has handed over the" signed in that year, landed in that year, and that year Excellent answer sheet of "put into production and benefit in that year".